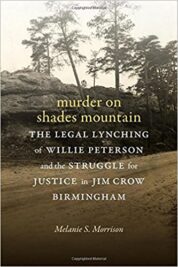 By Melanie Morrison.  Tells the story of an attack that occurred in 1931 on three white women in a remote area of Alabama and its tragic aftermath. Reveals how the judicial system could function as a lynch mob in the Jim Crow South and sheds new light on the struggle for justice in Depression-era Birmingham. Read more.