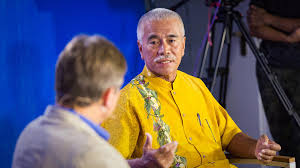 A TED Talk featuring the President of Kiribati, Anote Tong, who discusses his country’s present climate catastrophe and its imperiled future in a conversation with TED Curator Chris Anderson. For the people of Kiribati, climate change isn’t something to be debated, denied or legislated against — it’s an everyday reality. The low-lying Pacific island nation may soon be underwater, thanks to rising sea levels. He says that, In order to deal with climate change, there’s got to be sacrifice. There’s got to be commitment. We’ve got to tell people that the world has changed. Watch now.