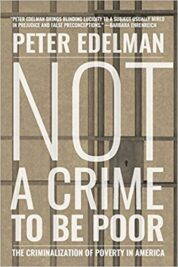 By Peter Edelman. Argues that through money bail systems, fees and fines, strictly enforced laws and regulations against behavior including trespassing and public urination that largely affect the homeless, and the substitution of prisons and jails for the mental hospitals that have traditionally served the impoverished, in one of the richest countries on Earth, we have effectively made it a crime to be poor. Read more.