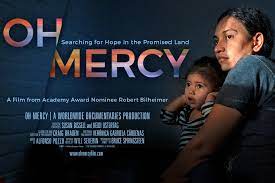 The first of three films in Running To Stand Still, a series of documentaries about the global refugee crisis, and its inextricable link to the multi- billion dollar human exploitation industry. Oh Mercy focuses on the thousands of refugees, migrants, and asylum seekers from Central America awaiting court dates and immigration hearings in the US—many for well over a year. Increasingly desperate and discouraged, they are huddled in squalid camps and detention centers on both sides of the Rio Grande, which for several hundred miles serves as a natural border between Mexico and the United States. Watch the trailer.