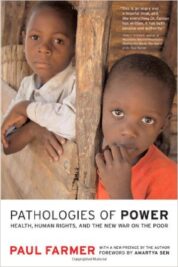 By Paul Farmer. Uses stories of life and death in extreme situations to question a common understanding of human rights. Argues that promoting the social and economic rights of the world’s poor is the most important human rights struggle of our times. With eyewitness accounts from the prisons of Russia and villages of Haiti and Chiapas; links the experiences of victims to a broader analysis of structural violence. Exposes the relationships between political and economic injustice, on one hand, and the suffering and illness of the powerless, on the other. Shows that the same social forces that give rise to epidemic diseases such as HIV and tuberculosis also risk human rights violations. Illustrates the ways that racism and gender inequality in the United States are embodied as disease and death. Read more.