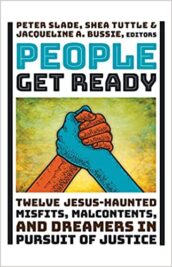 Edited by Peter Slade, Shea Tuttle and Jacqueline A. Bussie. In a political climate where Christianity is increasingly seen as reactionary, offers a revolutionary alternative. Narrated by some of the most galvanizing voices of the current moment, this collection of succinct and evocative biographies tells the stories of twelve modern apostles who lived the gospel mission and unsettles what we may think we know about Christianity’s role in American politics.

As the spiritual successor to Can I Get a Witness?, presents a diverse cast of twentieth-century “saints” who bore witness to their faith with unapologetic advocacy for the marginalized — from novelists to musicians to scientists, these courageous men and women rose to the challenges of their times. Read more.