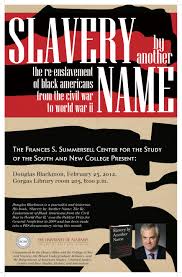 By Douglas A. Blackmon. An examination of how the enslavement of African-Americans persisted deep into the 20th century, revealing the use of forced labor by dozens of U.S. corporations and commercial interests in coal mines, timber camps, factories and farms in cities and states across the South, beginning after the Civil War and continuing until the beginning of World War II. Read more.