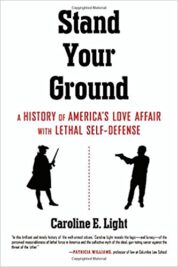 By Caroline Light. Explores the development of the American right to self-defense and reveals how the original “duty to retreat” from threat was transformed into a selective right to kill. Traces white America’s attachment to racialized, lethal self-defense by unearthing its complex legal and social histories—from the original “castle laws” of the 1600s, which gave white men the right to protect their homes, to the brutal lynching of “criminal” Black bodies during the Jim Crow era and the radicalization of the NRA as it transitioned from a sporting organization to one of the country’s most powerful lobbying forces. Shows how violent self-defense has been legalized for the most privileged and used as a weapon against the most vulnerable. Read more.