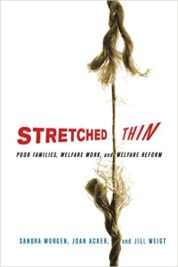 By Sandra Morgen, Joan Acker & Jill Weigt. Using ethnographic observations, in-depth interviews with poor families, and welfare workers, tracks survey data of more than 750 families and documentary evidence over two years and suggests how welfare policy in the US can be changed to better address the needs of poor families and the nation, questioning the validity of claims that welfare reform has been a success by showing how poor families, welfare workers, and welfare administrators experienced and assessed welfare reform differently based on gender, race, class, and their varying positions of power and control within the welfare state. Read more.