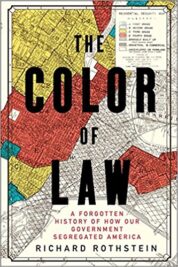 By Richard Rothstein. Argues that American cities did not come to be racially divided through de facto segregation — through individual prejudices, income differences, or the actions of private institutions like banks and real estate agencies. Rather, it shows that that it was de jure segregation― the laws and policy decisions passed by local, state, and federal governments―that actually promoted the discriminatory patterns that continue to this day. Read more.