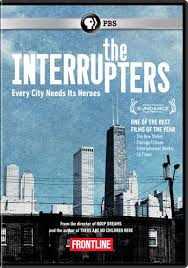 A resource from PBS Frontline, this documentary presents profiles in courage, as three former street criminals in Chicago place themselves in the line of fire to protect their communities. The two-hour film follows the lives of these “violence Interrupters,” who include the charismatic daughter of one of the city’s most notorious former gang leaders, the son of a murdered father, and a man haunted by a killing he committed as a teenager. As they intervene in disputes to prevent violence, they reveal their own inspired journeys of struggle and redemption. Watch the trailer.