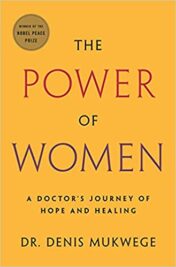 By Denis Mukwege. A call-to-action from a renowned Nobel laureate doctor and human rights activist to confront sexual violence and better learn from women’s resilience, strength, and power. Seeks to explain why sexual violence is so often overlooked during war, and how governments need to recognize and compensate victims. Stresses the importance of breaking down taboos surrounding assault, and the necessity of building a system that supports women who come forward. Calls for a reckoning with the West’s involvement in perpetuating sexual violence in places like the Democratic Republic of Congo, South Korea, Latin America, and the Middle East to confront the abuse taking place in their own communities. The book also addresses men, encouraging and guiding them to become allies in the fight against sexual abuse, in war and in peace. Makes the case, that when women are involved as economic and political decision makers, all of society benefits. Read more.