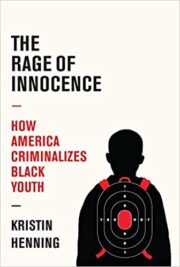 By Kristin Henning. An analysis of the foundations of racist policing in America: the day-to-day brutalities, largely hidden from public view, endured by Black youth growing up under constant police surveillance and the persistent threat of physical and psychological abuse. Confronts America’s irrational, manufactured fears of these young peo­ple and makes the case that the crisis in racist American policing begins with its relationship to Black children. Explains how discriminatory and aggressive policing has socialized a generation of Black teenagers to fear, resent, and resist the police, and details the long-term consequences of rac­ism that they experience at the hands of the police and their vigilante surrogates. Unlike White youth, who are afforded the freedom to test boundaries, experiment with sex and drugs, and figure out who they are and who they want to be, Black youth are seen as a threat to White Amer­ica and are denied healthy adolescent development. Read more.