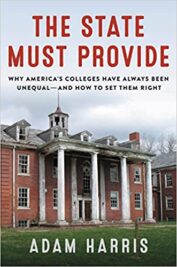 By Adam Harris. Argues that the higher education system in this country has systematically excluded Black people from its benefits. Weaves through the legal, social, and political obstacles erected to block equitable education, studying the Black Americans who fought their way to an education, pivotal Supreme Court cases like Plessy v. Ferguson and Brown v. Board of Education, and the government’s role in creating and upholding a segregated education system. Explores the role that Civil War–era legislation, intended to bring agricultural education to the masses, had in creating the historically Black colleges and universities that have played such a major part in educating Black students when other state and private institutions refused to accept them. Read more.