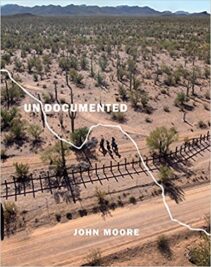 By John Moore. A book comprised of photos taken over a decade focused on the issue of undocumented immigration to the United States. The photographer has access to both immigrants during their journey, as well as to U.S. federal agents tasked with deterring them. Moore photographed the entire length of the U.S. southern border, and traveled extensively throughout Central America and Mexico, as well as to many immigrant communities in the United States. His work includes rare imagery of ICE raids, mass deportations, and the resulting widespread fear in the immigrant community. Read more.