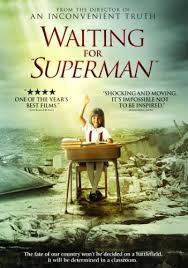 Criticizes the American public education system by following several students as they strive to be accepted into a charter school. Looks at teacher’s unions, the ease in which a public school teacher achieves tenure, the inability to fire a teacher who is tenured, and how the system attempts to reprimand poorly performing teachers. Teaching standards are called into question as well as conflicting bureaucracy between teaching expectations at the school, state, or federal level. Statistical comparisons are made between state school, private school, and charter schools. There are also comparisons made between schools in affluent neighborhoods and schools in poorer ones. Watch the trailer.