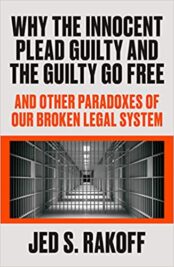 By Judge Jed Rakoff. A senior federal judge and expert on white collar crime, examines some of the paradoxes that define the judiciary today, featuring essays that explore a system of justice that often pressures the innocent to plead guilty and imprisons thousands of poor Black men for relatively modest crimes but rarely prosecutes rich white executives who commit crimes having far greater impact. Illuminates some of our most urgent legal, social, and political issues: plea deals and class-action lawsuits, corporate impunity and the death penalty, the perils of eyewitness testimony and forensic science, the war on terror. Also warns of the expanding reach of the executive branch and a judiciary that is constraining its own constitutional powers. Read more.